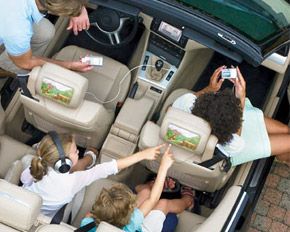 A few months ago the engine in my car died. I’m glad the kids weren’t in the car with me when it happened, because what came out of my mouth was most definitely not G-rated. The only good thing about the whole predicament was that I got to buy a brand spankin’ new car. I’ve never owned a brand new car, as in I’ve never had a 2012 in 2011.

When we went to look at cars I was pretty overwhelmed by all of the extras. Do I really need an automatic start? Can I live without Sirius radio (the answer is no by the way)? LeaseTrader.com, the nation’s most recognized name in car leasing, polled roughly 1,000 parents on a variety of auto issues that are important to every parent today, including features and safety, vehicle choices, functionality versus technology, and even what happens when parents get pulled over by the police.

Must-Have Tech Gadget: Rear Back-up Camera. Combining technology and safety, the rear back-up camera scored the highest marks out of all parents polled because it gives them a great sense of security on anything or anyone who’s potentially behind the vehicle. 39.3% of parents said this would be their first choice in a tech gadget, followed by the ability to synch all electronics in the vehicle (21.7%).

Most Overrated Car Feature: Cool box. Of all the features available in cars today that are important to parents, including safety, functionality and technology, 42.4% of parents said they felt the cool box was the most overrated feature in a car. The cool box allows parents to keep food, beverages and other child essentials chilled during trips. The overwhelming summary from parents is that they already bring other cooler options into the vehicle and find that they aren’t using built-in chill systems as much.

Most Surprising Vehicle: Mazda 5 Crossover. Priced under $20,000 and available for lease as low as $250 per month, the Mazda 5 scored the highest overall points in terms of functionality, technology, overall features, roominess and price. Parents love its ability to seat up to six passengers comfortably, ease of getting car seats in and out, lots of storage space and a USB jack for technology favorites. On a scale of 1-10, with 10 being the best, the Mazda 5 Crossover received an average score of 8.3.

Most Disappointing Vehicle: Toyota Rav4. When asked if they felt their vehicle was disappointing in terms of its effectiveness for parents, the Toyota Rav4 had the highest number of mentions. The majority of parents said they were overall disappointed with the vehicle’s handling and feel there just isn’t enough space that’s adequate for their needs. On a scale of 1-10, the Toyota Rav4 received an average score of 4.7.

Best Sedan Choice: Ford Fusion Hybrid. Packed with features, this vehicle scored highest marks out of all sedans because of its full slate of creature comforts along with its ability to offer incredible fuel economy. The vehicle also comes with rear back-up camera and rear sensors, options high on everyone’s list this year, in addition to technology features that allows parents and kids to charge gadgets during the trip. On a scale of 1-10, the Ford Fusion Hybrid received a score of 7.9.

Given the Choice Between Optional 3rd Row Seats or DVD Package: Optional 3rd Row Seats. Admittedly, this one surprised us a bit. Sure, parents are big on functionality. But DVDs in the car go a long way towards pacifying kids during long trips. Perhaps that there is the issue. 47.3% of parents chose optional 3rr row seats over the DVD package (38.6% with 14.1% saying neither), possibly because we’re taking shorter trips? Either way, if you’re a parent who’s big into space, it’s hard to pass up a solid extra row. (*I went for optional 3rd row and I love it!*)

Excuse most often given if pulled over by police: Child had a dirty diaper (success of getting out of ticket – less than 10%). This one we had to have a little fun with. We all try to sometimes make an attempt at getting out of a speeding ticket. Ever wonder what parents do in this situation? Why not blame it on the diaper. The majority of parents said they’d tried this once when stopped for a speeding ticket. Perhaps they tried it only once because it worked for just 8.3 percent of those who admitted trying it.

About LeaseTrader.com: LeaseTrader.com, the most recognized name in car leasing, easily and affordably matches car shoppers with individuals looking to escape their auto lease. Visit www.LeaseTrader.com, on Twitter @Lease_Trader, or call 800-770-0207.

What kind of car do you drive? What made you decide on that car?

Silent Night: and Other Things I Want this Holiday Season

Quick and Easy Tips to Get Great Holiday Shots