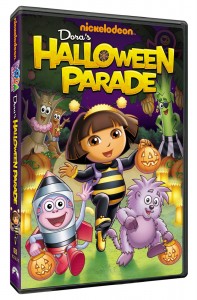 Boo!: It’s Halloween, and while trick-or-treating Dora and Boots are surprised by a cute little monster who they help home before the arrow on the big clock strikes 12.

The Backpack Parade: Everyone is dressing up their backpacks in different costumes for the Backpack Parade. Backpack is really excited because this year she gets to lead the parade but she’s having trouble with her allergies.

Dora, la Músico: Dora and Boots are leading a musical parade to free the instruments that were locked up by the evil Señor Shhh.

With Halloween next month this is a perfect DVD to help get your kids in the mood for trick or treating. Just be ready to hear them saying things like “trick or treat” more often.

A Few of My Favorite Things

How I Met My Valentine: Sarah and Keith